Alan Cook, the rabbi of Sinai Temple since August 1, 2013, was ordained at the Hebrew Union College-Jewish Institute of Religion in Cincinnati, Ohio in 2003. He served as an assistant rabbi at Temple Sinai in Denver, Colorado for four years, and as an associate rabbi at Temple De Hirsch Sinai in Seattle, Washington for six years..

Prior to entering the rabbinate, Rabbi Cook pursued a career in education, earning a Master’s Degree in Elementary Education from Washington University in St. Louis, and teaching in a Jewish day school in Memphis, Tennessee. Rabbi Cook has extensive experience in the field of Jewish camping, and strives to build meaningful connections to Judaism for congregants of all ages.

Rabbi Cook is particularly passionate about our Jewish responsibility for Tikkun Olam, performing deeds of social action in an effort to perfect the world according to God’s vision. He also seeks to strengthen interfaith cooperation within the community.

Rabbi Cook is married to Rabbi Jody Cook, who was also ordained at HUC-JIR. Rabbi Jody and Rabbi Alan have three children, Gabe, Orli and Eden.

Follow this link to read Rabbi Cook’s blog “Cookie Crumbs” for Jewish thoughts about life, the universe, and everything.

Norman Mark Klein, M.A.H.L., D.D., is Rabbi Emeritus at Sinai Temple. Rabbi Klein was ordained at the Hebrew Union College-Jewish Institute of Religion in 1985. He was the rabbi of Temple Ohav Shalom, in Allison Park, Pennsylvania from 1985-1991, and the rabbi of Temple Rodef Shalom in Waco Texas, from 1991 to 1995.

Rabbi Klein came to rabbinic school with an interest in literature, having done graduate work at Indiana University (ABD in the PhD program of the English Department), with thesis work on the subject of the interaction of character and place in contemporary novels set in exotic places. His rabbinic thesis focused on a contemporary Israeli novel.

Under Rabbi Klein’s tenure at Sinai Temple, the congregation instituted a variety of services and programs, including Mitzvah Day, Mitzvot Committees, congregational trips to Israel, and various minyanim so that we now have services most Shabbat mornings as well as Erev Shabbat. 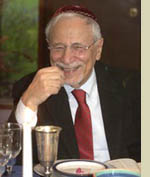 Isaac Neuman, M.A.H.L., D.D., was Rabbi Emeritus at Sinai Temple from his retirement in 1984 until his passing in 2014. Rabbi Neuman was born in Zdunska Wola, Poland, in 1922. He studied at three European Talmudic academines: Eitz Chaim in Kalisz, Emek Halacha in Warsaw, and Yeshivat Chachmei in Lublin, before Nazis invaded Poland in 1939.

Rabbi Neuman was a survivor of six Nazi concentration camps, including Auschwitz and Mauthausen. Neuman was a slave laborer for the Nazis and German munitions companies during a portion of his four years of internment. Neuman’s parents, six sisters and a younger brother all perished in the Holocaust.

Rabbi Neuman was liberated at Ebensee, Austria, by American soldiers of the 3rd Cavalry Group in May of 1945. He arrived in the United States in 1950 with no family, no assets, and little knowledge of English. Thanks to a scholarship from the National Federation of Temple Sisterhoods, Rabbi Neuman was able to earn a Bachelors degree from the University of Cincinnati, and Bachelor and Master of Arts and Hebrew Letters degrees from Hebrew Union College in Cincinnati, where he was ordained as a rabbi.

Rabbi Neuman served as a pulpit rabbi in the Republic of Panama, Alabama, Iowa, Illinois, and California over the course of 28 years. For 25 years, Neuman served as an auxiliary chaplain in the United States Armed Forces. In 1985, Rabbi Neuman was awarded a Doctor of Divinity degree from Hebrew Union College.

Rabbi Neuman was long active in interfaith and civil rights activities, serving as president of both the Cedar Rapids Conference of Clergy and the Champaign-Urbana Ministerial Association. He participated in the 1965 civil rights march in Selma, Alabama with the late Reverend Martin Luther King, Jr. Rabbi Neuman also served as Chief Rabbi of the German Democratic Republic from 1987 to 1988. President Ronald Reagan appointed Rabbi Neuman to a six-year term on the United States Holocaust Memorial Council in 1985.

Rabbi Neuman was the author of a memoir, The Narrow Bridge: Beyond the Holocaust, published by the University of Illinois Press.